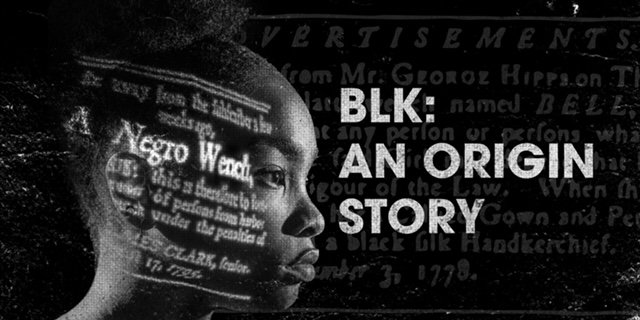 Stream Anytime with STACKTV or the Global TV App

TORONTO, January 13, 2022 – HISTORY® and Hungry Eyes Media Group announce the groundbreaking four-part docuseries, BLK: An Origin Story, premiering Saturday, February 26 at 9 p.m. ET/PT. The limited series, consisting of four 60-minute episodes, reveals the deep historic impact of Black presence in Canada. Executive produced by Jen Holness and Sudz Sutherland, BLK: An Origin Story is helmed by Hungry Eyes’ award-winning production team, who takes viewers on a nationwide journey through time to discover the untold story of Black people in Canada and their legacy, which dates back to 1608.

BLK: An Origin Story is steeped in riveting, enduring, and multi-faceted historical Black Canadian narratives. Each episode transports viewers to a different Canadian location, and provides chronologically significant insights into the consequences of Black presence in the areas. Featured outposts include Nova Scotia, Ontario, British Columbia, and Quebec. The series also highlights the legacy of Black contributions to the larger story of Canada itself, dating back to when explorer Mathieu de Costa first set foot on shore, more than 400 years ago. BLK: An Origin Story acts as an immersive and informative chapter of Black Canadian history, elevating remarkable Black Canadians previously unacknowledged in mainstream social, academic, and cultural circles, normalizing their unique stories as a matter of general record.

“As Canadian creatives, BLK: An Origin Story embodies our professional mission to champion fresh, and authentic perspectives toward storytelling. We crossed the country and spoke, listened, and learned. The result is four hours of programming that resets the understanding of Black history in Canada. It was important for us to deliver the series as a comprehensive, multi-layered, multi-disciplinary and essential Canadian journey. We are grateful to the stalwarts, knowledge keepers, and storytellers from Black Canadian communities and locations from Vancouver to Halifax, with Owen Sound, Amherstburg, Windsor and Montreal as points in between. They’ve shared the immense generational experiences and events documented in each episode. We view history, and Black contribution to Canadian history as a defining part of Canada’s overall identity, from both an inward and outward gaze,” said Jennifer Holness, Executive Producer, Hungry Eyes Media Group.

“It is a crucial time in our country’s history to reflect on and share the important Black narratives that influenced our nation,” said Lisa Godfrey, Senior Vice President of Original Content and Corus Studios. “We are proud to partner with the talented storytellers at Hungry Eyes Media who have developed this must-see and influential docu-series.”

“Black people are entitled to know how they have taken up space in Canada, going back to the beginning of how the country’s identity has been shaped. The historic learnings that we share in this documentary series are vitally important for our communities since we cannot move forward without acknowledging our tremendous contributions to Canada’s past,” said Sudz Sutherland. “In shedding these lights, the series contributes to the larger societal conversation toward dismantling systemic racism.”

BLK: An Origin Story elevates the unsung heroes who substantially contributed to Canada’s nation building and to Black Canadian history. The series shines a spotlight on the origins of diverse and deeply entrenched Black Canadian experiences, which range from being transported, escaped, or freely traveled within Canada. Part history book, part geography lesson, each of the four episodes leverages compelling footage, art, locations, archival materials, and interviews from some of the country’s best known and under known experts of Black Canadian lore, facts, and pedagogy. The list of authors, academics, musicians, historians, community leaders, activists and elders include George Elliot Clarke, Lawrence Hill, Charmaine Nelson, El Jones, May Q Wong, and Stephanie Allen, among others.

Descendants of The Black Loyalists, Jamaican Maroons and The Black Refugees represent Canada’s largest Black population today. Their incredible story begins in Nova Scotia in the 1700s and challenges our understanding of what should be considered a distinct society.

Born free of an Ojibwe father and an escaped-slave mother in Upper Canada, John “Daddy” Hall fought in the war of 1812, was captured and sold into slavery. Thirteen years later he makes a daring escape and finds his way back to Canada.

Before Urban Renewal, before displacement, and before dispersal, there was life. For many years Hogan’s Alley was the heart of Vancouver’s Black community. But that community began in the 1850s, when James Douglas, (the father of British Columbia) invited Blacks to settle Vancouver Island in an effort to stave off American annexation.

Tucked between Griffintown and St. Henri in Montreal’s Sud Ouest is Little Burgundy, home to a Black population led by Black men who worked in Canada’s railway industry as sleeping car porters. They were the first Black trade union to organize in North America and were among the leaders in the struggle for civil rights.

Hungry Eyes Media is co-founded by the dynamic creative duo of Jen Holness and Sudz Sutherland. Sutherland and Holness bring a fresh, authentic perspective to telling powerful, thought-provoking stories. In doing so they have racked up numerous national and international awards and accolades. Hungry Eyes also expanded its focus to develop content for mobile users as well. As a company with its own distinct mission plan, Hungry Eyes seeks to inspire and entertain!