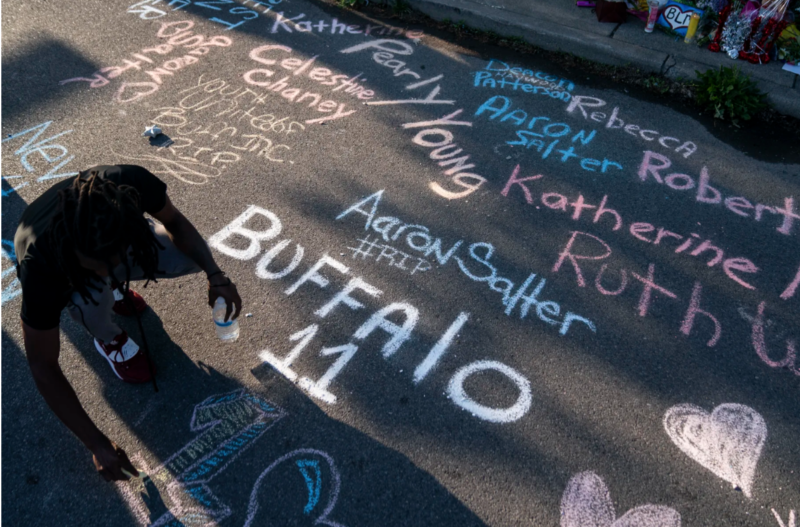 Spring has sprung and normally it’s a time of hope and renewal. But before we can share with you about what we are up to, we have to  take a moment to condemn  the hate-filled shooting in Buffalo that took the lives of 10 innocent Black individuals. Why is this happening? Hate, pure and simple. Anti Black racism and the lies of white supremacy must be challenged and eradicated. We ask that YOU take a moment to consider the victims and their family. Then consider even just one action you can take to stand in solidarity with Black folks against racism and hate. It’s out there, in your purview. Do something good.

The HEM Family are going down to Buffalo to drop off a donation of baby formula that we purchased next week at the The Alfiero Family Center at 100 East Tupper Street. Buffalo, NY 14203. It’s just a little bit, but if we all do something, we can move mountains.

At the time we were going to release this, another shooting happened in an elementary school in Texas. This makes no sense.

We must keep on keeping on, and to start we are excited to be producing award winning director R.T. Thorne’s feature film, 40 ACRES.

Visionary, multi-award winning filmmaker Randall Thorne (A.K.A R.T Thorne) has emerged as one of Canada’s most eclectic storytelling voices since debuting on the music video scene over a decade ago. A versatile triple threat, he is a director, producer, and screenwriter, focused on telling stories that break new ground representing the unrepresented.

His latest project THE PORTER, is a critically acclaimed historical drama for BET & CBC, of which R.T. directed half the episodes as well as Executive Produced. In 2020 he created UTOPIA FALLS, an award winning HULU ORIGINAL, Afrofuturistic science fiction series, which he also directed and Executive Produced.

Hailey Freeman and her family are the last descendants of African American farmers who settled in rural Canada in 1875 after the first Civil War. Two hundred years later, they struggle to survive in a post-apocalyptic, famine-decimated future, and must make their last stand against a band of organized cannibals, intent on taking their 40 ACRES.

“This research trip was one of the most profound experiences of my life. The Gawlos who know my family’s history shared the most incredible stories of my ancestors, my family elders told me precious anecdotes about my dad’s childhood in Dakar and shared mystic tales of our family’s ancestral village. Immersing myself in my family’s Toucouleur culture has nurtured my soul and inspired me beyond measure. I can’t wait to go back to shoot the feature!” – Aïcha Diop

Last year we criss-crossed this beautiful country of ours filming BLK: An Origin Story.  We met so many interesting, cool-ass people doing interesting, cool-ass things.  We want to shine a light on some of the people that we met.  Black women Connect Vancouver is a collective of Black women founded by Nataizya Mukwavi. Feeling isolated in Vancouver, Nataizya reached out to her Black girlfriends and found that they all felt the same!  She thought she might have 15 women for her first meeting, and it turned out to be over 70!

They are building community with events like Sip and Paint, but they also do things like run “Empowered Black Girl,” a Mentorship conference for young Black girls in Vancouver.  They are truly building a sense of community on the left coast! Hearing about them through the grapevine known as the internets, we reached out and asked if we could profile them.  Nataizya was all over it and we began to correspond.

We finally met in person last September and it was a powerful experience to be surrounded by so many awesome, beautiful, intelligent, creative sistas! Check them out in the Vancouver episode of BLK: An Origin Story if you haven’t seen it!

Subjects of Desire was featured in the Toronto Star!

Canadian filmmaker Jennifer Holness made her directorial debut with the documentary “Subjects of Desire” last year, which explores how beauty standards impact Black women. Holness’s film follows contestants at the 50th Miss Black America pageant in 2018 and intertwines the history and racism tied to Black beauty standards. One of her biggest motivations for developing this project came from her three daughters, Rayne, Daeja and Cici Sutherland.

Jen also moderated a panel for the Black Screen Office about its groundbreaking study, Being Seen.

HEM is headed to beautiful Banff! Jen and Temilola will be at Banff World Media Festival representing our slate of projects that includes drama series, documentaries and feature films! Jen will also attend her first in person CMPA Board Meeting. That is after nearly after 2 years on the board, no thanks to COVID-19.  With all this happening, you can imagine the excitement in HEMland as we prep for Banff World Media Festival!

Reach out and schedule a meeting or drinks! See you there!