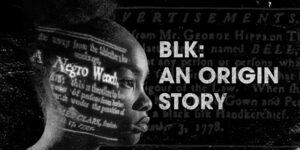 We’ve been here since the 1600s, and our story has never really been told.

BLK: An Origin Story is cinematic a four-part doc series that starts a conversation that’s been a long time coming.

Since the 1800s, Canada has been synonymous with the idea of freedom for Black refugees from Slavery. What is not as well known is that Slavery was practiced here by both the British and French for over 200 years before it was abolished in 1834. In fact, Slaves from Upper Canada ran to Michigan which was a free state at the time.

There is so much more to Canadian Black history than the Underground Railroad.

BLK: An Origin Story weaves narratives from across the country and the globe – creating a magnificent tapestry that illustrates the invaluable contribution Black Canadians have made that has been ignored for too long.

From the fierce Jamaican maroons that helped to build Halifax, Nova Scotia…to the free Blacks from California who settled British Columbia, BLK: An Origin Story shares a rich and powerful untold history for a new generation.

TYPE: DOCUMENTARY SERIES
STATUS: PREMIERES on The HISTORY Channel on Feb 26 at 9PM ET/PT and on Global on March 4 at 9PM ET/PT

Stream anytime with STACKTV or the Global TV App